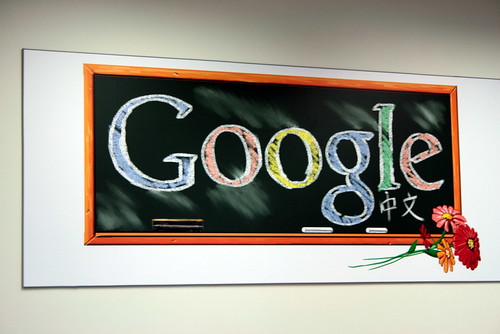 Notes: A Chinese blogger Zhou Shuguang visited Google’s office in Beijing. He wanted to talk to somebody for his money earned from Adsense. His dialogue with the receptionist is interesting.

Zhang Lili: How long could the camera take video?

Zola: (Encountering a security guard) Hello. Excuse me. How should I go to Google? I look for its customer services. I’m Google’s customer.

Security guard (SG): You’ve got to make appointment before you go.

Mewa: How about complaint?

Zola: I come here because I am not fairly treated by Google. Now I look for a person in charge. Where should I go?

Mewa: We should get your approval for filing a complaint?

SG: There is no one in charge of it.

Zola: No one in charge? Where is the customer services? Adsense.

SG: There is no customer services. Only R & D.

Zola: Where is the customer services?

Zola: Adsense’s customer services is in the US? How about the PR department? Google’s PR department. You are Google staff, aren’t you?

Zola: Okay. I go. (We entered Google company and arrive at the reception counter)

Zola: Hello, I would like to ask one thing. I’m Google adsense customer. I think that I’m not fairly treated by Google. Before I was hit maliciously, I already told the customer services about it. Somebody put my advertisment codes on his website and then call upon people to hit it. And Google’s customer services told me by email that it was being processed. I filed my complaint on March 20. On May 1, my account was terminated. I’m an online journal writer. A blogger. My visit rate increased because of that adsense was hit. Then I report the story about the strongest nail household in Chongqing. My visit rate soared suddenly. Probably a lot of strangers come to visit my website. They hit my advertisement. But those old friends, who subscribe my blog and are familiar with me and the interface of my website, would not hit the advertisment. So it probably led to the increase in hit rate. So I think that Google might treat me not fairly. In other words, although the hits between March 20 and May 1 might not be invalid, the income of US$70 generated before should be given to me. I helped improve the quality of adsense. You should guarantee that the US$70 should not be written off. I come here for that US$70.

(Receptionist listened to my story patiently. She immediately handed to me a slip with the email address of “[email protected]”. She told me to send email to it.)

Zola: I’ve sent many times. This is your “normal channel”. I know.

Zola: This address sent email to me to tell me they would help me. But no matter whether I complain or send email to him/her, I get no response. I’m from Hunan. I come to Beijing for this problem.

GR: The regulation here is that we don’t have phone support department. Neither do we have enquiry department. We only provide online support or email support.

Zola: Your “normal” channel is email, isn’t it?

Zola: He (the person in charge) is a Chinese?

GR: Yes, they are Chinese.

Zola: They work in China?

GR: They work in China. But they make contact with customers only through email.

Zola: I think I am unfairly treated. What should I do? Through the “not normal” channel of media? Or through email technical support?

GR: I suggest you use email because they … …

Zola: But when I get no response after complaint, what should I do?

GR: But we could do nothing. They do not allow us to inform them of it.

Zola: Do you have any senior supervisor here? May I talk to him/her?

GR: My supervisor is not in charge of this problem.

Zola: But you should have a technical support team responsible for service quality and customers’ satisfaction.

GR: Yes, we do have. But they do not receive guest.

GR: So what you could do is to send your account information and situation to them by email.

Zola: It’s ridiculous for me to come here in vain except getting an email address, isn’t it?

GR: Right. But I could not inform them. I had done so before. They told me not to do it. They told me to give the customers an email address. If I informed them of your case and arranged a meeting for you, I would not be here tomorrow.

Zola: I understand. I don’t need to meet anybody. Just tell me what I should do.

GR: How to do? They just told me to tell you: send email.

Zola: Oh. My camera records everything you said.

GR: I know. What I told you is the same as what they said.

Zola: I understand. I will seek support from media. Google has to take care of public relatons. Oh. May I come in to visit?

GR: No. Visit is not allowed.

Zola: Could you tell me where the customer services department is?

Zola: How is that? Where are the staff?

GR: They work upstairs. They do not allow me to inform them. They said…

Zola: Ah! If I wandered outside, would you get me away? If I wore my T-shirt with a slogan of “Give back my US$70″, would you oust me away?

GR: This is not my duty. This is the estate management job.

Mewa: You should not be so irresponsible.

GR: Right. They are not responsible. Not me.

Mewa: Not responsible. Please ask those responsible for it to come to see us.

Zola: Okay. Now I “force” you. Under my pressure, they get a senior staff to come to see me. Now I’m forcing you.

GR: Forcing me? Right. They are also forcing me.

Mewa: There are some problems with your customer services.

GR: They might have problems. But it’s not my job. They do not allow me to inform them.

Zola: I think that the current situation like those people who talke a long trip to visit the Complaints Bureau in Beijing. It just gives them a formal letter of response and send it the lower rank of department. Anway, it turns out to be nothing. Your so-called “normal procedure” doesn’t work at all.

Zola: As Google staff, how could you say “they”. They should represent your company’s image. Don’t say “they”. Don’t differentiate yourself from Google. You are representing Google.

Zola: (gloatingly) Now you said something wrong. I catch you now. I force you to ask your supervisor to come out. Okay?

Zola: It’s useful. I am recording it. The internet users will watch it.

GR: It is nothing for them to watch.

Zola: Let me show my face on camera.

Zola: (Continuing to preach to GR) Don’t say “they”. You’re Google staff. The word “Google” on your uniform proves that you’re representing Google. Don’t say “you” or “they”. You should say “we”. You represent Google. So I ask you to help me as much as possible. Tell me how to handle this issue.

GR: That’s all I could tell.

Zola: But you talk to me like an outsider. Now I ask you to talk to me in the name of this company.

GR: I didn’t talk to you as an outsider.

Zola: Why did you say “they”? You don’t represent “Google”?

(GR ignores Zola. She is using computer and touching her hair. Standoff )

Zola: (Talking to his friend gloatingly) Yu Shiwei said in his talk that staff should not say “their department”. It would result in internal conflicts.

Zola: (Continuing to force GR) Now the problem is that the communication between reception and customer services is not good enough. They criticized you informing them of what happened outside.Then you don’t tell them anything. This is an internal problem. Now I still request you to communicate with the customer services department.

GR: Now I ask you to tell our colleagues about everything you said. Then I can handle it better.

Zola: Right. I’ve recorded it. I will tell anyone who wants to know about it.

GR: Great. That’s perfect. Otherwise they would not know the difficulties of our job.

Zola: Right. I didn’t mean to embarrass you. But please tell them. Okay? Whether he takes care of it is up to him. You would fulfill your responsibility. You represent Google. You fulfill your duties. Right?

Zola: Now I ask you to call the customer services upstairs.

(GR picks up the phone and dials)

Zola: (Making fun. In order to get some entertainment effect, he shoots the fruit on the desk of the receptionist) Oh, there is fruit. So great is Google… … I am shooting fruit. … … I never offend you. At the very beginning, you said I may do so.

Zola: Now you may ask me to stop shooting.

GR: You have to delete all.

Zola: Okay. I switch off my camera.